NF is between the environment and health
We spare no effort to protect our customers' valuable health.

The cause is 'lack of oxygen'

Cardiorespiratory function weakens with age... Oxygen deprivation is getting worse 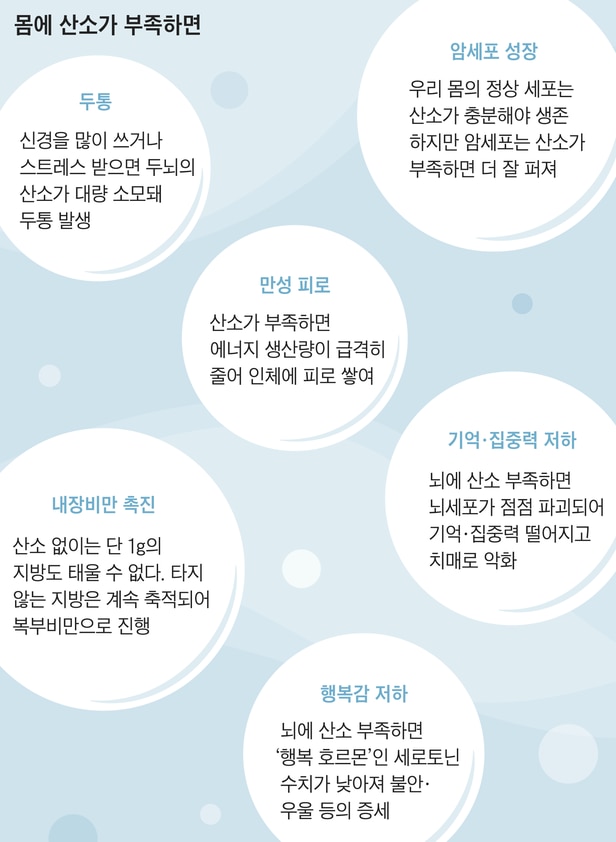 I want to laugh, but there are times when my face frowns.

It is because of the headache that comes from time to time.

Headache is one of the most common pain experienced by modern people.

There are many reasons for a headache, such as drinking, paying attention, angry or waking up from sleep.

But there is one clear thing in common. It is the lack of oxygen in the brain.

Humans die even if the oxygen supply to the brain is stopped for 10 minutes.

When the brain runs out of oxygen, it sends a danger signal, which is a headache.

This is why my head hurts when I go up in the high mountains.

Professor Gaitong, a world-renowned physiologist, emphasized, "Most diseases are caused by oxygen deficiency."

◇Headache is a warning not to use oxygen anymore

There are 75 trillion cells in our body, and all of these cells need oxygen. Cells die quickly without oxygen. In particular, brain cells respond most sensitively to oxygen. When you get too angry or overly stressed, your head hurts because your brain cells use too much oxygen. The reason my head hurts like it's about to break is a 'warning' not to use oxygen any more. Painkillers are not a radical solution. Headaches caused by lack of oxygen can only be resolved by supplying oxygen.

◇Insomnia and depression are symptoms of lack of oxygen

Insomnia is also a classic symptom of lack of oxygen. Blood oxygen levels in insomnia patients are lower than in the general population. When the concentration of oxygen in the body is low, the heart beats faster to replenish oxygen. When your heart beats fast, your brain stays awake and you can't fall asleep. The older you get, the more difficult it is to sleep because of the lack of oxygen. Older people have less lung capacity and therefore have less oxygen in their body than younger people. When the oxygen concentration drops, the sympathetic nerves in our brain are excited, leading to insomnia.

Depression also comes when the body lacks oxygen. The brain releases a hormone called serotonin, which makes you feel calm. Oxygen is also essential for the secretion of serotonin, which is called the “happiness hormone”. Therefore, sufficient oxygen supplementation is essential to improve insomnia and depression.

◇Cerebral infarction and cerebral hemorrhage due to lack of oxygen

◇Memory and concentration are ‘power of oxygen’

According to the results of an experiment conducted at Gyeongsang National University in September 2001, those who drank 2% less oxygen could not even write their own names, but those who drank high concentrations of liquid oxygen had better attention (16%) and memory (23%). This has been greatly improved.

Fatigue refers to a state of lack of energy in the body. Energy is created by the burning of nutrients in oxygen. It is the principle that energy is generated when an organ called mitochondria in the cell burns nutrients with oxygen. Fatigue is a state in which the body lacks oxygen and can no longer produce energy. If you exercise vigorously or use your head a lot, a large amount of oxygen is consumed. Relief from fatigue is the restoration of oxygen.

◇As you get older, your body loses oxygen.

People in their twenties are full of vitality and their stamina rises to the highest level. However, after the age of 40, the physical strength decreases rapidly and various diseases come. This change is directly related to oxygen. After the age of 40, the cardiopulmonary function gradually weakens, and after the age of 70, it decreases by 50%. This causes older people to take in significantly less oxygen than younger people, even if they breathe for the same amount of time.

Lack of oxygen is considered to be the root cause of headache, insomnia, depression, cerebral infarction, and fatigue. A quick and accurate way to solve the problem is to supplement with oxygen. Regular aerobic exercise should replenish oxygen, and frequent drinking of water also helps. Furthermore, 'oxygen therapy', which provides a large amount of oxygen to the body, is also a good way to fill the lack of oxygen.