NF is between the environment and health
We spare no effort to protect our customers' valuable health. 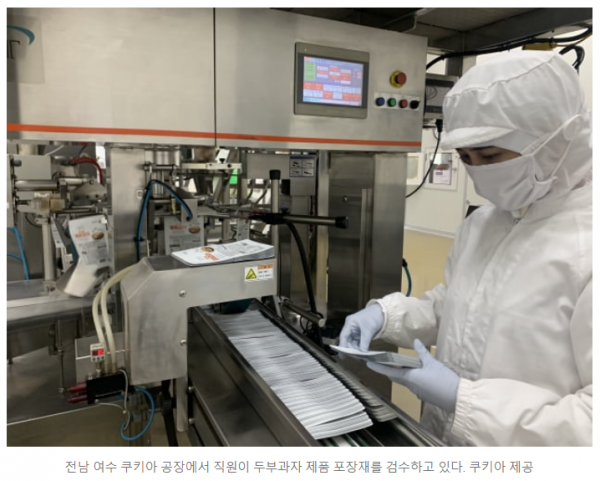 Cookiea, a tofu confectionery manufacturer in Yeosu, Jeollanam-do, had a backwards production plant that produced more products in the early stages.

However, with the help of the Small and Medium Business Center and Samsung Electronics, the introduction of a smart factory increased productivity by 80% and improved taste and freshness.

Now, it has become a popular snack that is exported all over the world.

NF, a company specializing in oxygen generators, also overhauled all production and logistics facilities with the help of Samsung to quadruple productivity and dominate the Indian market.

Myung-shin Kim, the CEO of Cookieia, who was an education entrepreneur, decided to sell the most popular ‘Tofu Snack’ menu while conducting a cooking education program for immigrant women in the Philippines.

Cookieia was founded in 2011. After thousands of experiments and efforts, in 2016, we launched ‘Tubu Cookie’ with 35% tofu content of pure domestic soybeans.

CEO Kim Myung-shin said, “It is the first organic snack in the world that contains a lot of tofu, which is not a tofu-flavored snack, but contains more than 20% tofu.”

However, they encountered a difficult problem in that the quality of confectionery differs between production processes. When making sweets, more and more sweets are thrown away because the quality does not match, so even if you sell a lot, there is no profit left. 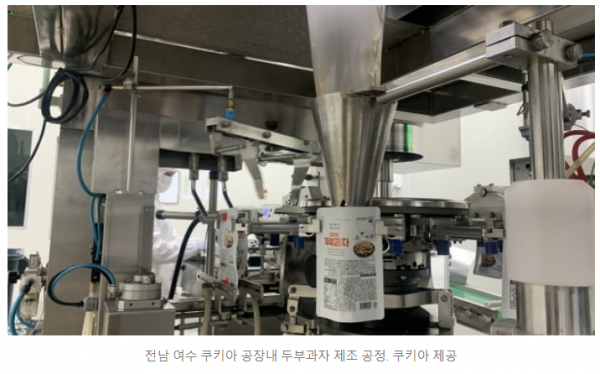 This problem was resolved in 2018 with the support of the Ministry of SMEs and Startups and Samsung Electronics' smart factory. Samsung eliminated the defect factors that occurred in the process of cutting the cookies,

The speed at which the conveyor belt rotates is also adjusted so that it is baked with the most delicious taste. In addition, a filter was installed in the oil treatment facility to help the sweets taste fresher.

As Samsung introduced automated packaging machines, it became possible to produce 10,000 bags at a factory that used to make 6,000 bags a day. The defect rate dropped from 13% to less than 4%.

CEO Kim said, "In the past, consumers didn't come back after eating once, but now the taste has improved to the extent that it has a mania."

Samsung entered the Costco store while helping to develop a market, and it has now become a 'nuclear insider' item in Costco. It is also being supplied to Hanaro Mart, GS Home Shopping, CJ O Shopping, and Olive Young.

Samsung Electronics also supported the establishment of its Suwon plant and its Vietnamese subsidiary. Currently, it has become a popular snack in China, Australia, Japan, and Vietnam.

Cookieia will be able to produce 40,000 bags a day from June as it builds a factory in preparation for increasing demand.

Samsung is also supporting the establishment of a 'green energy integrated solution' in the new plant, which is expected to reduce electricity bills in the plant by 30%.

NF, Korea's largest producer of medical oxygen generators, replaced manual work in the process with robots with the help of Samsung Electronics

Cell assembly method was introduced. Productivity quadrupled and the defect rate from 10% dropped to less than 1%.

Initially, it was difficult to meet the export volume to India, where the demand for patients with severe cases of COVID-19 was soaring, but thanks to Samsung, it was possible. India's exports soared fivefold in one year.

Currently, it is jointly developing an Internet of Things (IoT) oxygen generator with KT.

Meanwhile, the SMEs decided to support a total of 300 businesses by starting the application for a win-win smart factory support project with Samsung on the 11th.

Within 60% of the smart factory project cost, 60 million to 200 million won can be supported.

We need to help SMEs lay the groundwork for sustainable growth by expanding it,” he said.